Continued from … GDP 2: Supply chain of a television, a case study 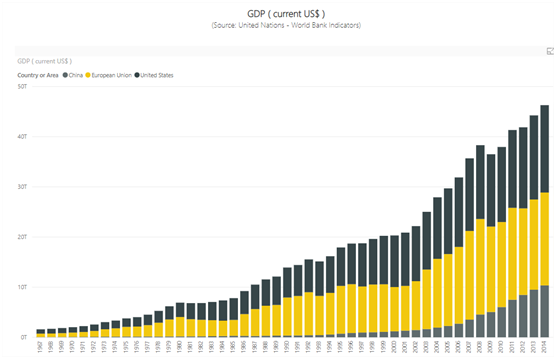 How much money do you have?

If a country has resources in their access, if it’s government could raise the educational level and facilitate the infrastructure to produce, any country can enter themselves on the world power list very soon. The treasury of such a developing country would multiply and the per-person salary would also increase. This aspect is called GDP per capita i.e. if the GDP for a nation is divided equally to its population. The GDP per capita for the whole world is $17,300 i.e. when the world income would be equally distributed to the whole world population, this will be our earning per year. In reality, every country has its own GDP and thereby the income per person differs with the world average $17,300 too. It follows a pattern called “Pareto principle” where 20% of the nations hold on to 80% of the wealth in the world. So the GDP per capita between each country can have drastic differences. As of 2017 a Qatarian has the highest income in the world of $ 125,000 [i]per year and Central African Republic earns the least in a year with $ 681.

Also within each country the distribution will differ based on government structures and policies. For example: In Qatar, not everyone would equally earn $ 125,000 per year, it will follow the same Pareto principle within the country where 20% of the population would hold on to 80% wealth in the country. Apparently the richest person in Qatar is the Sheikh of Qatar [ii]himself with a worth of $ 2 billion. In a country with a GDP $167 Billion, just that one person holds on to 1.1% of the wealth. Qatar has enormous resources of oil which it is able to capitalize.

A country is lucky if it should be abundant in resources that could be capitalized. For countries who don’t have that luxury, they usually would focus on improving their education skills and offer services to the resource rich countries i.e. the income from service sector can drive such economies. Once the money source has been organized, the role of a government then is purely to facilitate the money flow within the country and ensure a sustainable distribution to each of its population i.e. not letting people suffer in poverty. Just this one factor of “sustainable distribution” is the goal which all the different kinds of economic ideologies like Capitalism, communism, fascism etc. compete for and try to achieve. Diverse governments and political parties frame their policies based on these ideologies, to make sure that the GDP per capita saves its final citizen from poverty.

Capitalism correlates mostly to the consumerist society and it goes with the assumption that there are ample jobs constantly created in the market. Whoever earns tends to survive and the role of the government would be mostly to make sure that enough jobs are available. Communism promises a better distribution among the population and the state itself might hold a significant part of the income and distribute only what is needed; Fascism is dependent mostly on the ideology and beliefs of the country’s leader, which makes it unpredictable. Although China makes a communist propaganda on the outside, the happenings in the last couple of decades seem to incline more towards capitalism.

As soon as a country would have the opportunity to tap into a resource, it would be like opening a treasure. Anyone who would touch it will start to mint money. All world politics lies on who taps the resources first. Dominant countries can play the game in a way that they gain access to resources of other nations. Poor countries would be put in a helpless situation, where they would be forced to sell their nature areas, to generate a credit. Two world events in the last decades stand proof to this fact: the American century long politics for Middle East resources and China’s hasty and strong investments and acquisitions in Africa. They have been offering so much “Flash news” over the decades that a media company can see profit just by reporting just these two happenings and the issues surrounding it. China is one such country who started facilitating its infrastructure from 1990’s and since then they were just on the roll. But why is the west afraid? Let me narrate a second story which attempts to simplify the fight for resources

To be continued…GDP 4: The chocolate river: on how the first world is having withdrawal symptoms!

3 thoughts on “GDP 3: Rise of consumerism”