We analyzed the increase in wealth and increase in population so far. There is one another biggest threat which might choke the economy sooner or later. In our previous analysis, we saw that just the world Aluminium industry employs over 1 million [i]people and supports other 5 million jobs. The graph below shows that the industrial sector occupies about 22% of the working population. Of all the minerals in the background of these industries, only aluminium makes about 1.3% jobs directly and about 10% indirectly. 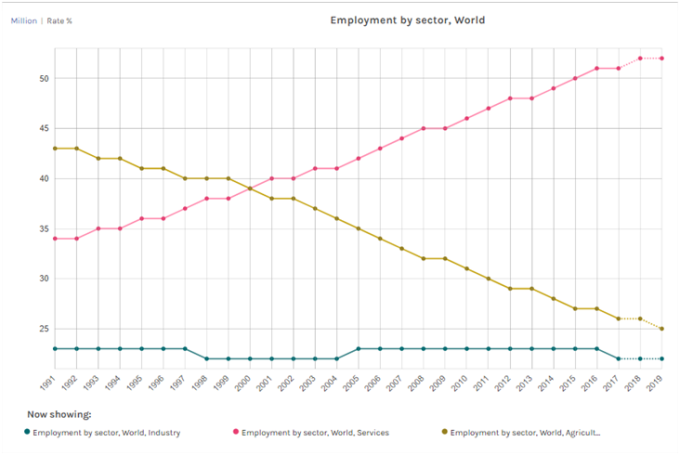 Imagine the scenario if the supply of Aluminium should suddenly stop! 10 million people would need new jobs overnight. In the analysis where you were both the consumer and worker, you were increasing your salary by switching jobs within the industry. Now the whole industry does not have work. Employees can’t switch jobs within the same sector too. People who were trained for nuances in Aluminium would find it very difficult to transfer to another sector. When too many people should suddenly come under the government payroll, the government treasury has to bridge their expenses till they find a new job. They might have to increase taxes to the other employees who might not be happy with the move and take it to a protest on the streets. A capable government would borrow money from other economies. In either of the cases, the timing of governments on how quick they can react is very crucial.  Many countries have laborious bureaucratic processes. For a first world country like Germany, when the surge of refugees happened, the government took years to respond.  As in our scenario, when a whole industry should face a shutdown overnight, it will be really challenging on how the governments will tackle. If they make delays, the person who lost the job and is depending on government, may be pushed to extreme consequences over credit burden. But how likely is this scenario to happen?

It was shocking to learn that Material pricing is not done based on scarcity, rather just on free market pricing. What this statement means is that, every year material price increases by certain extent. This price inflation usually has a supply and demand reason behind, where when a certain material has a demand, the manufacturers from the up the supply chain can ask for an increase in price every year, which the companies down the chain will be willing to pay for. So increase in price does not necessarily mean the material availability is decreasing. In fact, there is a possibility of sudden stop to happen i.e. after a century long constant pricing or mild increase, there might be sudden peak in price, when the resource base is found to be emptying soon.

Quoted from the paper[iii] – “The problem is that the true size of the resource base is never known. Society does not know if technology is actually overcoming scarcity or not until demand for a resource outstrips supplies. It is even possible for a price shock of incredible magnitude to surprise an economy within one or two years after a hundred years of declining prices and increasing production.”

If we see the global increase in use of minerals, almost all the minerals are mined with the assumption of infinite availability. If Earth is completely mined of its last ore, the hope is that by then the technology would have advanced enough to take us to the moon or mars or has achieved 100% recyclability. I will leave it to the readers to decide which sounds more like fantasy – going to mars or running out of resources? I found a presentation titled “The future of mineral resources[iv]” by Price and Hitzman which hideously concludes that we are unlikely to run out of mineral resources. It looked like a presentation that someone would make to Trump. It makes me wonder, what the difference between gypsies and us is. Gypsies grazed a land till its last piece of vegetation, moved to the next land and grazed further. It makes the consumerist economies simply look as educated gypsies. Aluminium’s extraction exploded from about 1 million tonnes in 1950 to over 50 million tonnes currently. 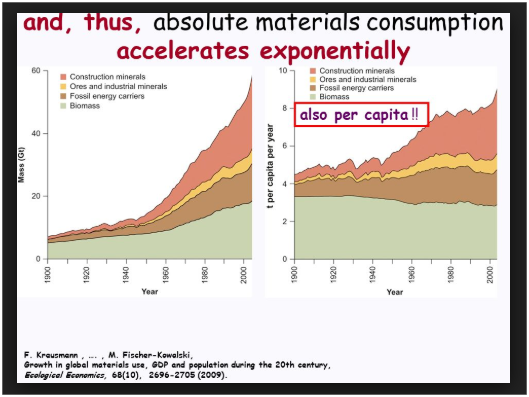 The similar explosion in use of resources and increase in usage of electricity can be seen in the graphs below.

With increase in population, the exponential increase in material extraction is just showing more tendencies to increase rather than slowing down or being constant. Every political party and its term ruling the government has traits of managing a company after all. It needs to show an increase in GDP to the previous year. A slowdown might even topple the government and bring a new obliging party to power who will simply continue with making a graph always showing an upwards trend. The likelihood of a material stoppage is hard to predict until it occurs. But when it occurs, the likelihood that it could happen overnight could not be eliminated.  We should be mentally prepared to face such a situation. Governments should focus on these threats, parallel to making their upward trend graphs.

To be continued .. GDP 7: the third threat – Environmental Choke