Sadly the most to suffer in all these fast changes are the plant, animal species and their homes i.e. forests. The diverse man made acts have caused tumult to the environment that its sudden changes has been unfavourable to many of the species, including us humans. It’s as if humans have declared themselves as the only “worthwhile” species and simply ruled out the aspect of “Co-existing”. To gauge this impact, I have split the topic into two sub-sections

The total available land on earth in 2016 can be split as in the following representation. 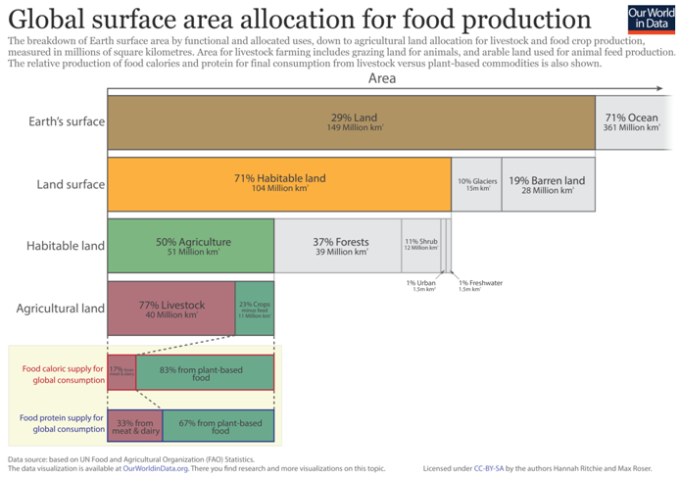 As of 2014, the world population was living in the 1% of land. To feed the then 6 billion people mostly living in this 1% area, 50% of the land was needed for agriculture. With today’s population of 7.4 billion and further increase, more land would be needed to feed more mouths and more space would be needed for living. This land has to be taken from somewhere. Unless a global scale policy is made on reduction in land for livestock which is seen to taking 77% of the agricultural land, the most likely option is to get the forests converted. Every inch of the forests would be converted for agricultural use or industrial use or for urban living. Although the graph above represents 37% for forests and 11% for shrubs, many other sources seem to disagree and they go with an even lower figure of 31%. It was found that the reduction in forests from pre-industrial era to today is one third i.e. from 45%, we are down at 31% and the most change has happened after 1950! Looking into the future, it’s calculated that we are losing 8.3 million hectares [ii]year by year, which means that with this trend we will lose all the forests within 100 years!

It would be interesting to have a comparison on how the land division would have been in the pre-industrial area, but the data was hard to find. Alternatively, the graph below might give you an idea of the extreme vandalism after 0 AD and the second big rise after the industrial revolutions.

Why are forests important?

Quoted from “Green tumble[iii]”: “Forests cover 31 percent of earth’s land surface and house a majority of the plants and animals found on earth. It is estimated that these diverse ecosystems house 80 percent of the world’s terrestrial biodiversity. Rain forests have especially high species density, covering 2 percent of earth’s surface, but housing nearly 50 percent of all plant and animal species. These plants and animals are integral to forest ecosystems and provide countless ecosystem services to humans. If forests ceased to exist humans would be unable to survive. As important as forests are both environmentally and economically, many of our global forests are severely affected by deforestation. Deforestation is one of the leading causes of climate change and species extinction.”

2. Intolerance towards other species

On one side the “Obese” guy is not buying climate change and on the other hand no one really seemed to have cared about animals so far. Starving animals would be the least of priority to the world governments, especially the obese guy, who seems to have the focus on not letting the Person 11 overtake his GDP.

The world’s major ignorance towards the rest of the species is evident in the following graphs and it is outrageous. 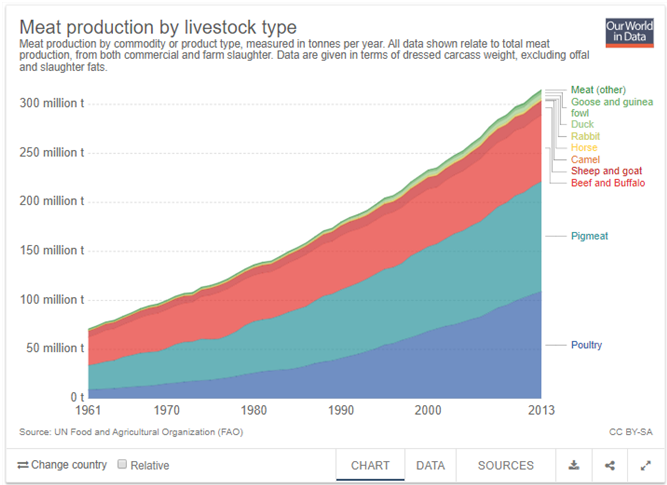 The above graphs simply say that the animals are slaughtered in alarming masses. The topic of the article which gave the data source to the extinction graph titled it as the “sixth mass extinction” and this one is man-made. If you divide the world animals into two categories as meat animals and non-meat animals, the non-meat animals are heading towards extinction simply by us ravaging their houses – the forests. And the meat animals are purely “control bred” for eating. In 2013 109 million tonnes of poultry meat, 112 million tonnes of pig meat and 68 million tonnes of beef were produced world over. An average poultry bird yields 1.71 kilos, a cattle type yields 209.6 kilos and a pig yields 78 kilos. Dividing this to the production, we can say that approximately 63 billion birds, 1.43 billion pigs, 0.3 billion cows and diverse other livestock are killed per year to feed the 7.5 billion and growing humans. The terrible part is that these animals are control bred in this mass year by year and slaughtered. Going Vegan is an appreciable side effect as a protest to this practice. Veganism may not be the answer, but when 77% of the lands are needed to control grow and carry out these mass killings and they could certainly be reduced by having it allocated for cultivating more crops. The crops consume way less space and can cover the consumption need of the growing population. At the same time, relieving the land from the livestock is a win-win situation, which gives us an option to be able to convert them to forests. This study does not cover water species as the historical numbers were showing an obvious increase in consumption, like any other graphs above, but was difficult to be converted to something tangible to address the seriousness under the water!

To be continued: GDP Conclusions: history of world GDP and its side effects