Continued from Electricity 5: My reluctance towards building electric cars for private use

1. Electric cars as private transportation – not really the “Green Guardian”

There are four main arguments which make me consider that Electric cars may not be the ideal solution environmentally and towards the general aspect of “Driving”. The latter applies not just to electric cars, but in general to all modern cars.

Firstly the electric cars have diverse issues and the biggest of it is the “Energy mix” factor. The automakers show enormous push and I assume “Lobbying” too to secure their market presence sooner, but is it really worth it? They propagate it as being environment friendly and sophisticated. A first world country like Germany can imagine of using electric cars in a healthy way as it’s constructively working on its energy mix. By 2038[i], it has planned to completely phase out it’s coal usage and I’m very confident that it will do so. It has already been showing its actions for nuclear to have it phased out by 2022 positively.  Expecting this behaviour to the rest of the world countries puts the “environmental friendly” tag of an electric car as questionable and miserable.

Secondly the infrastructure needed for charging stations and battery disposals and additionally the funding needed to convert the current petroleum (diesel & petrol) set-up to electric is unimaginable for an implementation on global scale. Can this infrastructure be developed for the whole world in a foreseeable amount of time and fast? Unfortunately the issue of CO2 does not pertain just to the first world countries. We need a world solution and immediate. Looking from this angle, the push from the automotive companies merely looks like a withdrawal symptom for them to give up their current revenues. A move to electric will just secure their revenues and would not help the world in any way.

Thirdly when so much money is anyways pumped into research of intelligent systems, why insist on the concept of a “Driver” still? Better scrap all the private transportation which in modern cars anyways are increasingly driven by the software. Rather let the software take over the whole “Driving” aspect. Yes! I’m talking about driverless cars. The last post discussed on the topic as an ethical issue in terms of accidents. Driverless cars wouldn’t have this issue and me as a beer crate user Gen 2.0 who is struggling to change my habit from manual cars, I can perfectly imagine being driven than being asked to be friends with an intelligent system. At least I have the hope of developing the habit and accepting to drive a modern car. My dad who never used a smart phone, will never be able to adapt to the modern driving which increasing needs us to interact with the software systems. A driving license in his case wouldn’t be applicable anymore to this case. A new driving license should not just teach “Driving” but also “Interacting” with the software systems.

The Fourth and final is the disagreement over “Drivertainment”. When so much focus is put towards increasing the entertainment quotient of the passengers and the drivers in the car, the risk of having the awareness reduced towards the surroundings increases. This is a safety critical issue and might lead towards much regulation for the drivers. The whole aspect of driving would turn out to be safety critical and very stressful which is exactly the opposite feeling of driving a manual car.

Refer to my blog post on where I discussed about “Transition products”. In a product spectrum life cycle, you also have crests and troughs of how a product variant is accepted in the market. It can split into three types – Standard products, Transition products and failure products. If a launched product fails, usually it will be removed completely out of the catalogue or fixed for its issues and will be re-launched in a different brand name – These are “Failure products”.  Meanwhile “Standard Products” have the longest life cycle in the market as people have accepted it. People are able to connect to some feature in the product that they find it hard to give up. Examples here are our standard petroleum cars. I would categorize Electric cars as a “Transition product”, as it has the capability to make the people change their habit, but does not promise universal acceptance. Usually such transition products facilitate the route to a completely new “Standard product”! In my blog post, I would have discussed on how tooth powder acted as a transition product helping people switch from lemon twigs to tooth brush and tooth paste concept.

The new Standard products given the current development could logically be the “Driverless cars”. The nature of driverless cars tackles issues software interaction and “Drivertainment” inherently. The issue of energy mix and Infrastructure will remain the same for this issue too. But rather than focusing the development of infrastructure for electric cars, developing it for driverless cars makes sense on the long run. A transition product like an electric car will be short lived. The infrastructure developed for this electric car will have to be partially scrapped and only a part of it can be carried over to the next spectrum which in this case is a “Driverless car”.

All the fuss of the automotive industry is still over “private transportation”. Electric cars wouldn’t change much if it still will be sold to private customers. The usual argumentation for private transportation is the sense of privacy, flexibility and the ability of reaching places not covered by the public network. All are valid and there is one more argumentation above all – Status symbol! I will avoid discussing on Status symbol as it’s a cultural and psychological issue and is out of scope here. A friend of mine from Rome mentioned that the Italians in Rome avoid public transportation as apparently it makes them perceive to be lower in class.

Apart from status symbol, to address the other three issues, let’s assume a locality with 1000 people. On today’s standards, this place will have easily 500 privately owned cars. Can privacy and flexibility be covered with less than 50 cars which can be rented as necessary? It is imaginable. Either a start up or the government can organize to own and maintain these cars and rent out as needed. The village where I live in Germany has a train connection to a bigger city 40 km away every half an hour. But there is no connection the nearby villages. Only possibility is a car! We have the necessity to drive to these villages at least 2 times a week. We can imagine renting a car for these purposes.

The third point is that the public network does not cover all the places. I made a simulation on what if public transportation is organized to cover the entire network available in a city. I took a city approximately the size of Stuttgart. Stuttgart has about 1500 km of roads and roughly half of its population of 0.63 Million people own cars. 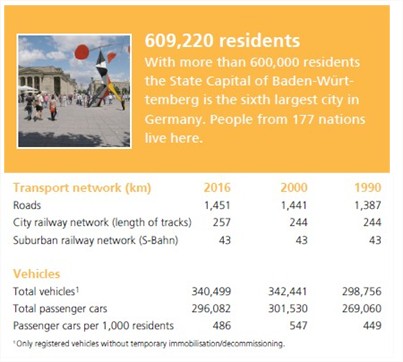 I took references from multiple websites to estimate infrastructure, operational and overall costs of trains, trams, buses and cars. I wanted to calculate two numbers – the cost of ownership per person for privately and publicly owned transportation units and their respective CO2 Emission profiles. The final result is shown below. I have published a simplified version here. If any of you is interested in the details, please write in the comments. I can forward you the detailed excel calculations behind.

Under classic public transportation I assumed getting rid of private transportation i.e. private ownership of vehicles completely. In this section, I made an assumption on what if such a wholesome public transportation uses “electrified units” exclusively! This may be driverless in the near future. If the push should happen in this direction, it may be a win-win situation for the automotive industries and the governments too.

Automotive companies can diversify into building infrastructure for driverless cars and compensate for their loss with petroleum cars. This will be an amicable solution on the long run too. All their efforts to vigorous lobbying for electric cars can be saved. After all, if their pitch for electric cars is being environment friendly, we need a better product. Which leads me to ask why not “electrifying public transportation”?

Government cannot restrict movement of population! It has to facilitate it in a way that it both cost-effective and has the least environmental footprint. The table below compares four logistics systems through which movements can be facilitated.

(2) Cost per person per month. Including all costs – capital, operational, Maintenance & Infrastructure, disposal or recycling

(5) The operational costs includes the same cost of labor as with drivers too. As the programming needs for driverless cars might be higher, a future driver might be a costlier resource who is just a monitor sitting somewhere like in an Air traffic control. If cost of labor can be reduced by a certain extent, this will decrease the cost per month too

As you can see in the above simulation

Point 2 can be technically implemented immediately on the governments’ will. In the blog post on CO2 emissions I have mentioned that we are emitting 30 billion tonnes of CO2 every year. Of this one-fourth are just contributed by vehicles i.e. about 8 billion tonnes CO2. Switching to public transportation completely could reduce the emissions 1.5 billion tonnes. That’s 6.5 billion tonnes CO2 lesser on a Global scale!

If you are already using the public transportation, you are really the “Green Guardian”. You buying electric will not make you one. You are already one!

Given the option, walk and bike wherever possible! – That’s really “Going green” and “Going healthy” too!

No to private Electric Cars! Yes for Electrifying public transportation!

If you like my posts, please acknowledge your motivation by Following/ Liking/ commenting on this blog. Thanks for reading

Credits: This topic over electric cars owes much to the discussion with my friend Mithun Kashyap. “Electrifying public transportation” was his terminology

3 thoughts on “Electricity 6: Electric cars for private use vs. Electrifying public transportation”